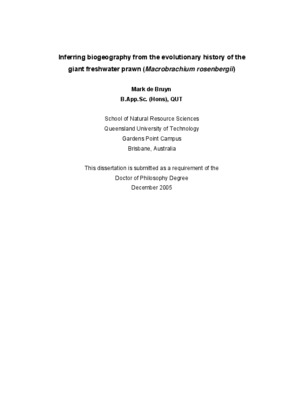 The discipline of historical biogeography seeks to understand the contribution of earth history to the generation of biodiversity. Traditionally, the study of historical biogeography has been approached by examining the distribution of a biota at or above the species level. While this approach has provided important insights into the relationship between biological diversity and earth history, a significant amount of information recorded below the species level (intraspecific variation), regarding the biogeographical history of a region, may be lost. The application of phylogeography - which considers information recorded below the species level - goes some way to addressing this problem. Patterns of intraspecific molecular variation in wide-ranging taxa can be useful for inferring biogeography, and can also be used to test competing biogeographical hypotheses (often based on the dispersal-vicariance debate). Moreover, it is argued here that phylogeographical studies have recently begun to unite these two disparate views, in the recognition that both dispersal and vicariance have played fundamental roles in the generation of biodiversity. Freshwater dependent taxa are ideal model organisms for the current field of research, as they reflect well the underlying biogeographical history of a given region, due to limited dispersal abilities - their requirement for freshwater restricts them. To this end, this study documented the phylogeographical history of the giant freshwater prawn (Macrobrachium rosenbergii) utilising both mitochondrial (COI & 16S) and nuclear (microsatellite) markers. Samples (n = ~1000) were obtained from across most of the natural distribution of M. rosenbergii [Southern and South East (SE) Asia, New Guinea, northern Australia]. Initial phylogenetic analyses identified two highly divergent forms of this species restricted to either side of Huxley's extension of Wallace's Line; a pattern consistent with ancient vicariance across the Makassar Strait. Subsequent analyses of molecular variation within the two major clades specifically tested a number of biogeographical hypotheses, including that: 1.) a major biogeographical transition zone between the Sundaic and Indochinese biotas, located just north of the Isthmus of Kra in SE Asia, results from Neogene marine transgressions that breached the Isthmus in two locations for prolonged periods of time; 2.) Australia's Lake Carpentaria [circa 80 000 - 8 500 before present (BP)] facilitated genetic interchange among freshwater organisms during the Late Pleistocene; 3.) sea-level fluctuations during the Pleistocene constrained evolutionary diversification of M. rosenbergii within the Indo-Australian Archipelago (IAA); and 4.) New Guinea's Fly River changed course from its current easterly outflow to flow westwards into Lake Carpentaria during the Late Pleistocene. The results support hypotheses 1-3, but not 4. The potential for phylogeography to contribute significantly to the study of historical biogeography is also discussed