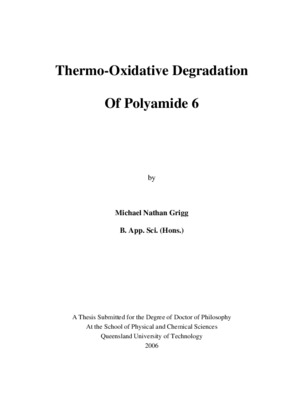 The thermo-oxidative degradation of unstabilized polyamide 6 (PA-6) was investigated by a number of novel techniques in an attempt to achieve a better understanding of the mechanisms involved in the oxidative degradation of polymers. Particular attention was given to the influence of end groups on PA-6 oxidation by studying samples that terminated predominantly in carboxylic, amine or methyl end groups. The changes occurring in the oxidative stabilities and mechanisms of PA-6 as a result of altering the end groups of PA-6 were investigated by a technique termed CL-DSC, which simultaneously measures the chemiluminescence (CL) and heat flow (DSC) from a sample. When amine end groups were abundant in the PA-6 sample a chemically induced electron exchange luminescence (CIEEL) mechanism could occur directly and the CL intensity was proportional to the heat flow curve of the DSC. However, when amine end groups were absent it was the first derivative of the CL intensity that was proportional to the heat flow curve because the CIEEL mechanism could not operate until an easily oxidisable luminescent oxidation product was formed. Due to the dramatic effect end groups have on the oxidation mechanisms of PA-6 it was hypothesized that end groups could be sites analogous to the impurities in polyolefins that lead to heterogeneous oxidation. To test this hypothesis, CL Imaging was used to map the occurrence and extent of oxidation across samples of PA-6 to display the influence end groups have on the homogeneous or heterogeneous nature of PA-6 oxidation. Sequences of FTIES spectra collected at specified time intervals during the in situ oxidation of PA-6 samples terminating in the different end groups were turned into oxidation product profiles. The differences between spectra related to significant points on the oxidation profiles were compared in an attempt to elucidate the chemical or physical changes occurring in the samples during oxidation. To identify the species involved in the mechanistically different oxidation processes resulting from the different end groups, methods for the MALDI-TOF analysis of non-oxidized and oxidized PA- 6 samples were developed via trial and error. It was only possible to detect the occurrence of degradation products by MALDI-TOF MS after considerable oxidation as measured by chemiluminescence, by which time the species were the result of a number of oxidative processes. Therefore, identification of the species formed was not possible