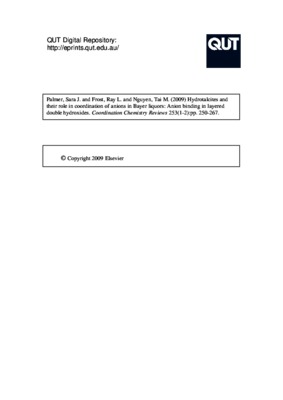 Hydrotalcites and their role in coordination of anions in Bayer liquors: Anion binding in layered double hydroxides

Bauxite refinery residues (red mud) are derived from the Bayer process by the digestion of crushed bauxite in concentrated caustic at elevated temperatures and pressures. Following the recovery of the valuable alumina containing portion, there remains an alkaline residue consisting primarily of iron oxides, aluminium oxides, silica oxides, titanium oxides and trace heavy metals. This slurry residue, if untreated, is unsuitable for discharge directly into the environment and is usually stored in holding dams. The liquid portion has the potential for discharge, but requires pre-treatment before this can occur. Seawater neutralisation of the solid residue is one such treatment which has been employed in recent years. This process facilitates a significant reduction in pH and dissolved metal concentrations, through the precipitation of hydrotalcite-like compounds and some other Mg, Ca, and Al hydroxide and carbonate minerals. The hydrotalcite-like compounds, precipitated during seawater neutralisation, also remove oxy-anions of transition metals through a combination of intercalation and adsorption of the anionic species on the external surfaces, where small anions are intercalated while larger organic molecules are adsorbed. Layered double hydroxides (LDHs) have been investigated for many years as host materials for a range of anion exchange intercalation reactions. The lamellar structure of LDHs can be used for the controlled addition or removal of a variety of species, both organic and inorganic. This is achieved through their ability to adjust the separation of the hydroxide layers, and the reactivity of the interlayer region. The high affinity of hydrotalcites for carbonate anions means that it cannot be reversibly exchanged and so prevents its use as an anion exchange material. However, carbonate can be removed by thermal decomposition, evolving CO2. The resultant material adsorbs anions when placed in solution and reverts to the hydrotalcite structure. Significant advances have been made recently on the characterisation of these materials, including structural studies on the mechanism of intercalation