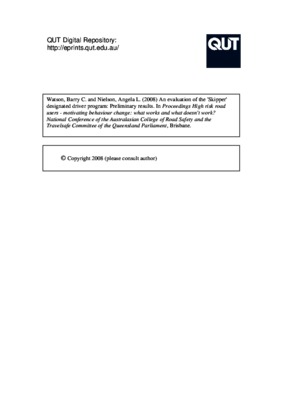 An evaluation of the 'Skipper' designated driver program: Preliminary results

The general aim of designated driver programs is to reduce the level of drink driving by encouraging potential drivers to travel with a driver who has abstained from (or at least limited) consuming alcohol. Designated driver programs appear to be quite widespread around the world, however a limited number have been effectively evaluated. This paper reports the preliminary results from the outcome component of an evaluation of a designated driver program called 'Skipper', which was trialled in a provincial city in Queensland. In order to asses changes over time in self-reported designated driver awareness and behaviour, as well as drinking and drink driving behaviour, surveys were conducted three weeks prior to (baseline) and four months following (follow-up) the commencement of the trial. The sample comprised 413 individuals from representative drinking venues in the 'intervention area' (202 baseline; 211 follow-up) and 401 individuals from a 'comparison area' (203 baseline; 199 follow-up). The preliminary results indicate that awareness of the program in the intervention area was quite high four months following its introduction. The results also suggest that the 'Skipper' program and the related publicity had positive impacts on behaviour with there being an increase in the proportion of people participating in designated driver as a passenger and a tendency for those who act as designated drivers to do so more often. In addition, there was no evidence of an increase in alcohol consumption among the passengers of designated drivers compared to what otherwise may have been the case. It is less clear at this stage whether the 'Skipper' program has impacted on other behaviours of interest. Suggestions for further research and program improvement are discussed as well as limitations of the research