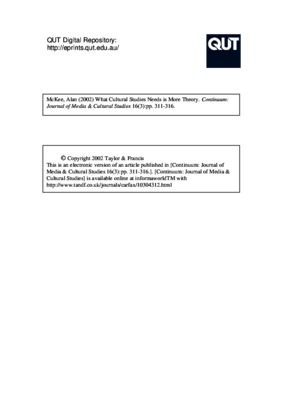 The topic of the 2001 Cultural Studies Association of Australia conference was 'What's left of theory?' Not an easy question, of course, and one that I would like to approach by asking another: What do we mean by 'theory'. In May 2001, I published an article in the CSAA newsletter called 'What cultural studies needs is less Adorno'. Some of the responses I got to this piece suggested that my underlying message was 'what cultural studies needs is less theory'. I am taking the opportunity here to suggest that a rejection of Adorno is not the same thing as a rejection of theory. In fact, the title of this article can be expanded slightly: 'What cultural studies needs is more theory. And less Adorno'. The argument of my piece in the newsletter was that attempting to generalise cultural theories across different historical and cultural circumstances is not - it seems to me - always very useful. The distrust of mass culture evinced by writers of the Frankfurt School, for example, is perfectly comprehensible in the context in which they wrote: but I don't think it tells us very much about Australian - or British, or American - culture at the beginning of the twenty first century. We need to expand our theoretical bases, rather than contracting them. But by this, I do not mean simply including Zizek in our reading lists. Rather, I am interested in who we call a theorist, and what parts of culture we honour with the title of 'theory'. I am worried that we tend to think that academics and participants in what we used to call 'high culture' (before we dismantled such boundaries) are 'theorists'; while workers in popular forms of culture rarely receive that name. Working recently on the related concept of the 'public intellectual', I was depressed to see how many cultural studies writers see 'intellectuals' are being only academics, literary novelists and performance artists. By contrast, the category of cultural workers most commonly derided (by several writers) is the talk show host