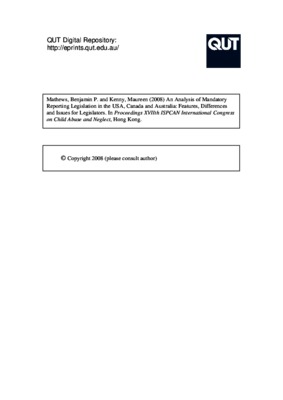 An Analysis of Mandatory Reporting Legislation in the USA, Canada and Australia: Features, Differences and Issues for Legislators

By Benjamin P. Mathews and Maureen Kenny
Get PDF (319 KB)

Purpose Mandatory reporting laws are a central part of many governments’ strategy to detect cases of abuse and neglect, protect children and their rights, and facilitate service provision to children and families. These laws have developed over many years in the USA, Canada, and Australia. Different developments in these laws mean they now feature significant differences, both within and between these nations, so that some states have cast a broader reporting net than others. This paper summarizes the results of an analysis of mandatory reporting legislation in these three countries. Methods The authors accessed child protection legislation in every jurisdiction in the USA, Canada and Australia via online legislative databases maintained by state, territory and province legislatures. Legal analysis enabled the extraction of relevant information about the scope of the legislative duties to report suspected child abuse and neglect. Results Four components of the laws have significant differences: which persons are mandated reporters; what types of abuse and neglect they are required to report (including emerging types of abuse such as exposure to domestic violence, and exposure to drug-related activity); what extent of suspected harm is required to activate the reporting duty; and whether reports are required only of past abuse or neglect, or also of suspected risk of future abuse or neglect that has not yet occurred. Conclusions Comparison of the laws reveals differences which would appear to affect reporting practice and hence disclosure of cases of child abuse and neglect. The analysis highlights issues facing legislatures and policymaking bodies in countries already having reporting laws, regarding the preferred scope of the law. Findings are also instructive for any jurisdiction that is developing reporting laws and for jurisdictions which may in the future choose to design a system of mandatory reporting