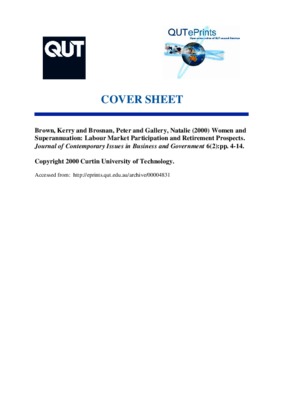 By Kerry A. Brown, Peter Brosnan and Natalie Gallery
Get PDF (79 KB)

Superannuation has risen to prominence as the vehicle for providing workers with additional retirement income, supplementing the government-provided age pension. In Australia, the union movement spearheaded a move in 1986 to include superannuation as part of social wage considerations in National Wage Cases. The stated objective of the Labor government in supporting superannuation was to improve the retirement incomes of low-income earners. As women comprise a large portion of those earning low incomes, the effect on women will be significant. This article analyses the gender implications of the shift to provide retirement incomes through a private sector-based superannuation system rather than the utilising the welfare system to provide a government-provided age pension. The existing superannuation system has been criticised for creating inequalities for low-income earners and generally entrenching inequity for low income groups. This contention is considered in the article