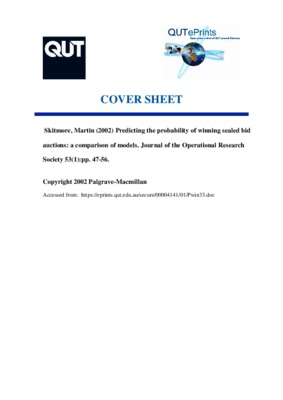 Predicting the probability of winning sealed bid auctions: a comparison of models

This paper is concerned with predicting the probability of tendering the lowest bid in sealed bid auctions. Four of the leading models from the bidding literature are shown to be subsumed within a general model – differing only in their method of parameter estimation. These models are then tested relative to the equal probability model by an empirical analysis of a large sample of real construction contract bidding data via all-in, one-out and one-on sample frames. A binomial test is used to measure the ability to predict the identity of the lowest bidders and the average logscore is used to measure the ability to predict the probability of each bidder being the lowest. Optimal cut-off criterion values are determined for defining the minimum size of dataset needed for disaggregating bidders. The work also highlights the importance of (1) the treatment of new entrants and general shortage of data on individual bidders, and (2) the treatment of predicted ties