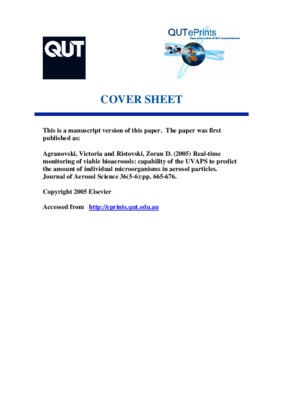 Real-time monitoring of viable bioaerosols: capability of the UVAPS to predict the amount of individual microorganisms in aerosol particles

By Victoria Agranovski and Zoran Ristovski
Get PDF (213 KB)

The Ultraviolet Aerodynamic Particle Sizer (UVAPS) is a novel aerosol monitor for enumerating and sizing microbial aerosols. To explore the capability of the method to estimate the number of microorganisms (bacteria) in aerosol particles, and thus to provide information on the concentration of airborne microorganisms, in addition to the total number of microbe carrying particles, a linearity of the UVAPS fluorescent signals with respect to the concentration of the fluorophores was investigated. As the amount of intrinsic fluorophores in bacteria may vary depending on viability status of the cells, the linearity was initially investigated for the non-microbial aerosols (NADH, NADPH, or riboflavin), with preset concentrations of fluorescent material in aerosol particles. The succeeding tests were performed with bacterial aerosols containing carefully washed Bacillus subtilis or Micrococcus luteus vegetative cells. To correlate the fluorescence intensity with particle size, which determines the amount of fluorophores (or cells) in the aerosol particles, the UVAPS data were analysed for each of 64 size-channels individually. The fluorescence intensity was linear with respect to the particle volume at the fluorophore concentrations characteristic to bacterial cells (correlation factors were typically greater than 0.9) and became curvilinear at higher concentrations. As the linearity of the UVAPS signals was confirmed for bacterial aerosols, it was concluded that the UVAPS can be used to estimate the concentration of airborne viable bacterial cells in artificially generated bioaerosols. The predicted concentrations of viable cells in the M. luteus aerosols compared favourably with the results of the AGI-30 sampling for culturable cells