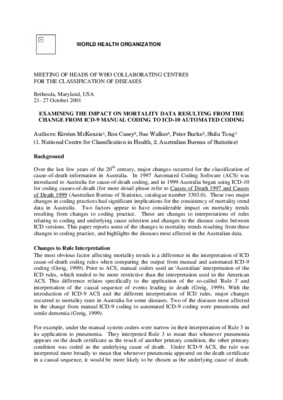 Over the last few years of the 20th century, major changes occurred for the classification of cause-of-death information in Australia. In 1997 Automated Coding Software (ACS) was introduced to Australia for cause-of-death coding, and in 1999 Australia began using ICD-10 for coding causes-of-death (for more detail please refer to Causes of Death 1997 and Causes of Death 1999 (Australian Bureau of Statistics, catalogue number 3303.0). These two major changes in coding practices had significant implications for the consistency of mortality trend data in Australia. Two factors appear to have considerable impact on mortality trends resulting from changes to coding practice. These are changes to interpretations of rules relating to coding and underlying cause selection and changes to the disease codes between ICD versions. This paper reports some of the changes to mortality trends resulting from these changes to coding practice, and highlights the diseases most affected in the Australian data