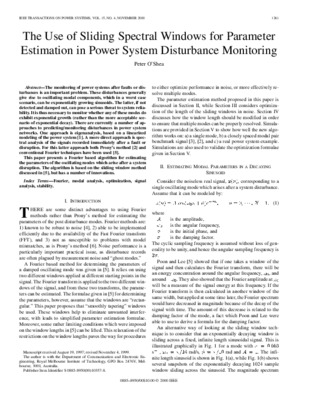 The monitoring of power systems after faults or disturbances is an important problem. These disturbances generally give rise to oscillating modal components, which in a worst case scenario, can be exponentially growing sinusoids. The latter, if not detected and damped out, can pose a serious threat to system reliability. It is thus necessary to monitor whether any of these modes do exhibit exponential growth (rather than the more acceptable scenario of exponential decay). There are currently a number of approaches to predicting/monitoring disturbances in power system networks. One approach is eigenanalysis, based on a linearized modeling of the power system. A more direct approach is spectral analysis of the signals recorded immediately after a fault or disruption. For this latter approach both Prony's method and conventional Fourier techniques have been used. This paper presents a Fourier based algorithm for estimating the parameters of the oscillating modes which arise after a system disruption. The algorithm is based on the sliding window method discussed by K. Poon et al. (see ibid., p.1573-9, 1988) but has a number of innovation