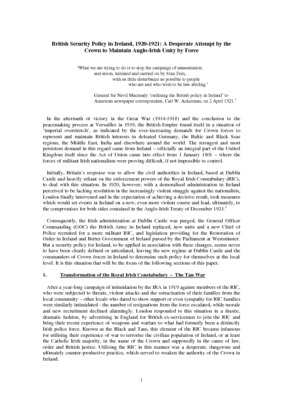 British Security Policy in Ireland, 1920-1921: A Desperate Attempt by the Crown to Maintain Anglo-Irish Unity by Force

In the aftermath of victory in the Great War (1914-1918) and the conclusion to the peacemaking process at Versailles in 1919, the British Empire found itself in a situation of ‘imperial overstretch’, as indicated by ever-increasing demands for Crown forces to represent and maintain British interests in defeated Germany, the Baltic and Black Seas regions, the Middle East, India and elsewhere around the world. The strongest and most persistent demand in this regard came from Ireland (officially an integral part of the United Kingdom itself since the Act of Union came into effect from 1 January 1801), where the forces of militant Irish nationalism were proving difficult, if not impossible, to control. Initially, Britain’s response was to allow the civil authorities in Ireland, based at Dublin Castle and heavily reliant on the enforcement powers of the Royal Irish Constabulary (RIC), to deal with this situation. In 1920, however, with a demoralised administration in Ireland clearly outclassed in the increasingly violent struggle against the nationalists, London finally intervened and, in the expectation of achieving a decisive result, took measures which would set events in Ireland on a new, even more violent course and lead, ultimately, to the compromises for both sides contained in the Anglo-Irish Treaty of December 1921. Consequently, the Irish administration at Dublin Castle was purged, the General Officer Commanding the British Army in Ireland replaced, new units and a new Chief of Police recruited for the RIC, and legislation providing for the Restoration of Order in Ireland passed by the Parliament at Westminster. But a security policy for Ireland, to be applied in association with these changes, seems never to have been clearly defined or articulated, leaving the new regime at Dublin Castle and the commanders of Crown forces in Ireland to determine such policy for themselves at the local level. The situation as outlined above raises a number of questions which will be considered in this paper, including: what policy or policies, if any, were articulated by the British Government in respect of the security situation in Ireland in 1920-1921? how were Crown authorities in Ireland supposed to act in accordance with, or in the absence of, such policy? was Ireland considered by the British to be in a state of war or civil unrest with regard to the struggle between Crown authorities and the nationalists? who then should have been primarily responsible for advice to the Cabinet on the development of security policy in Ireland - the War Office or Colonial Office? what were the consequences of this situation for Ireland and its relationship with Britain’