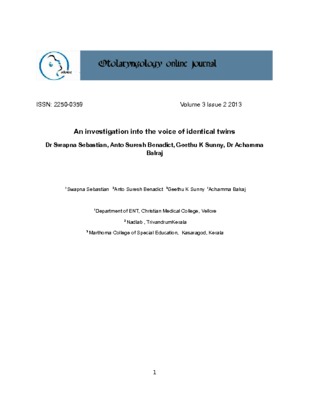 An investigation into the voice of identical twins

An investigation into the voice of identical twinsRunning title:  Voice of identical twinsAbstractThe study aimed at perceptually and acoustically differentiating the voices of identical twins from each other.  AX same-different perception test was done to find whether the voices of identical twins could be perceived as same or different voices. Ten monozygotic twin pairs, 5 males and 5 females between the ages of 10 to 15 year old served as speakers. The speakers phonation of \a\ was permuted which resulted in pairs of two different stimuli. The paired stimuli were part of one of the following speaker groups: same speaker (different repetitions) or monozygotic twins. For the AX perception test 5 native listeners (students of Speech Language Pathology) were asked to judge for each stimuli pair whether it belonged to the same speaker or different speakers. On average, the listener’s correct identification of same speakers was 91.6% and the correct identification of monozygotic twin pair’s voice as two different speakers was 80.27%. This shows that there was difficulty in perceptually distinguishing the voices of monozygotic twins as that of two different speakers but the listeners’ sensitivity to twin differences was greater than chance . Acoustic analysis showed that shimmer values are more sensitive in discriminating twin voices among each other. This investigation can contribute to automatic speaker recognition as well as the field of forensic phonetics, especially forensic speaker identification.Key words: voice parameters, voice , identical twinsKey message: Differentiating the voice of monozygotic twins while listening to their voice is difficult but can be done at greater than chance level. Acoustically also the voice parameters are more alike. Shimmer values were found to be different significantly among the twin pairs studied.