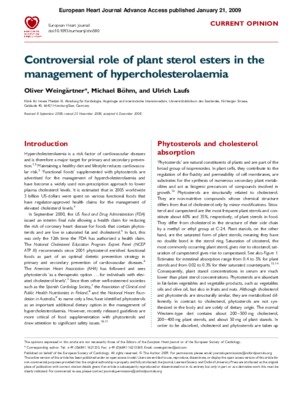 Controversial role of plant sterol esters in the management of hypercholesterolaemia

Hypercholesterolaemia is a risk factor of cardiovascular diseases and is therefore a major target for primary and secondary prevention. Maintaining a healthy diet and lifestyle reduces cardiovascular risk. \u27Functional foods\u27; supplemented with phytosterols are advertised for the management of hypercholesterolaemia and have become a widely used non-prescription approach to lower plasma cholesterol levels. It is estimated that in 2005 worldwide 3 billion US-dollars were spent on various functional foods that have regulator-approved health claims for the management of elevated cholesterol levels. In September 2000, the US Food and Drug Administration (FDA) issued an interim final rule allowing a health claim for reducing the risk of coronary heart disease for foods that contain phytosterols and are low in saturated fat and cholesterol. In fact, this was only the 12th time the FDA has authorized a health claim. The National Cholesterol Education Program Expert Panel (NCEP ATP III) recommends since 2001 phytosterol enriched functional foods as part of an optimal dietetic prevention strategy in primary and secondary prevention of cardiovascular diseases. The American Heart Association (AHA) has followed and sees phytosterols \u27as a therapeutic option ... for individuals with elevated cholesterol levels\u27;. Since then other well-esteemed societies such as the Spanish Cardiology Society, the Association of Clinical and Public Health Nutritionists in Finland, and the National Heart Foundation in Australia, to name only a few, have identified phytosterols as an important additional dietary option in the management of hypercholesterolaemia. However, recently released guidelines are more critical of food supplementation with phytosterols and draw attention to significant safety issues