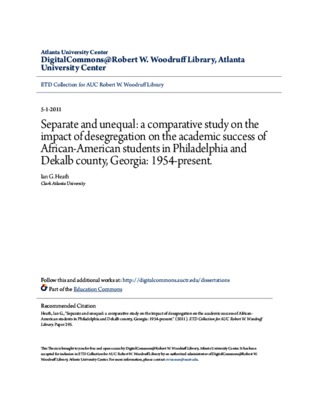 Separate and unequal: a comparative study on the impact of desegregation on the academic success of African-American students in Philadelphia and Dekalb county, Georgia: 1954-present.

This study examines how the American educational system has affected African American students and institutions since desegregation. The research is designed as a comparative study. It analyzes and interprets data relating to the success and hardships experienced by African-American students and teachers in educational institutions. Historical information was used to chronicle the policies and factors which contributed to the status of African Americans in the American educational system. Data was collected from both urban and suburban school systems. Results were compared then analyzed in order to determine if there was a difference in experiences and success rates for African-American students and teachers in both settings. Discipline records were examined, and national test scores of African-American students and institutions were compared. Data collected during this research can be used to increase the awareness of the disadvantages which many African Americans face when it comes to education. The conclusions drawn from these findings support the fact that African Americans have and continue to achieve despite a lack of resources or the intuition which they attend