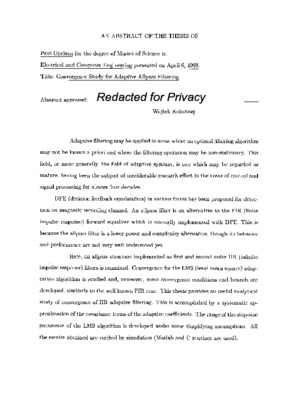 Graduation date: 1998Adaptive filtering may be applied in areas where an optimal filtering algorithm\ud may not be known a-priori and where the filtering operation may be non-stationary. This\ud field, or more generally, the field of adaptive systems, is one which may be regarded as\ud mature, having been the subject of considerable research effort in the areas of control and\ud signal processing for almost four decades.\ud DFE (decision feedback equalization) in various forms has been proposed for detection\ud on magnetic recording channel. An allpass filter is an alternative to the FIR (finite\ud impulse response) forward equalizer which is normally implemented with DFE. This is\ud because the allpass filter is a lower power and complexity alternative, though its behavior\ud and performance are not very well understood yet.\ud Here, an allpass structure implemented as first and second order IIR (infinite\ud impulse response) filters is examined. Convergence for the LMS (least mean square) adaptation\ud algorithm is studied and, moreover, some convergence conditions and bounds are\ud developed, similarly to the well known FIR case. This thesis provides an useful analytical\ud study of convergence of IIR adaptive filtering. This is accomplished by a systematic approximation\ud of the covariance terms of the adaptive coefficients. The range of the step-size\ud parameter of the LMS algorithm is developed under some simplifying assumptions. All\ud the results obtained are verified by simulation (Matlab and C routines are used)