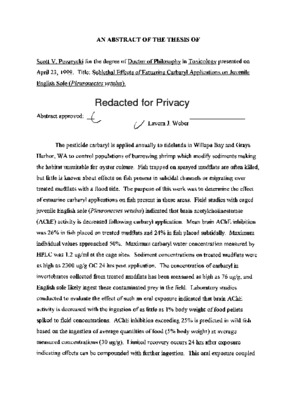 Graduation date: 1999The pesticide carbaryl is applied annually to tidelands in Willapa Bay and Grays\ud Harbor, WA to control populations of burrowing shrimp which modify sediments making\ud the habitat unsuitable for oyster culture. Fish trapped on sprayed mudflats are often killed,\ud but little is known about effects on fish present in subtidal channels or migrating over\ud treated mudflats with a flood tide. The purpose of this work was to determine the effect\ud of estuarine carbaryl applications on fish present in these areas. Field studies with caged\ud juvenile English sole (Pleuronectes vetulus) indicated that brain acetylcholinesterase\ud (AChE) activity is decreased following carbaryl application. Mean brain AChE inhibition\ud was 26% in fish placed on treated mudflats and 24% in fish placed subtidally. Maximum\ud individual values approached 50%. Maximum carbaryl water concentration measured by\ud HPLC was 1.2 ug/ml at the cage sites. Sediment concentrations on treated mudflats were\ud as high as 2300 ug/g OC 24 hrs post application. The concentration of carbaryl in\ud invertebrates collected from treated mudflats has been measured as high as 76 ug/g, and\ud English sole likely ingest these contaminated prey in the field. Laboratory studies\ud conducted to evaluate the effect of such an oral exposure indicated that brain AChE\ud activity is decreased with the ingestion of as little as 1% body weight of food pellets\ud spiked to field concentrations. AChE inhibition exceeding 25% is predicted in wild fish\ud based on the ingestion of average quantities of food (5% body weight) at average\ud measured concentrations (30 ug/g). Limited recovery occurs 24 hrs after exposure\ud indicating effects can be compounded with further ingestion. This oral exposure coupled\ud with the effect measured in caged fish suggests AChE inhibitions exceeding 50% are possible assuming the effects are additive. The significance of this decrease in AChE activity was then evaluated in terms of two ecologically important endpoints. First, the effect of carbaryl on the ability of English sole to bury in sediments was determined Results indicate this behavior is affected by carbaryl in a dose-dependent manner with fish not burying at higher concentrations. A regression model indicated that 50-60% brain AChE inhibition is a threshold value below which burying decreased sharply. This is within the range of estimated field exposures. Recovery of burying behavior occurs shortly after the removal of the exposure with all exposed fish in the present study recovering the ability to bury in sediments within 24 hrs. Mean brain AChE inhibition at the time of recovery was 60%. The effect of carbaryl on the English sole nonspecific immune response was also evaluated. Head kidney phagocytes were isolated from English sole and exposed to carbaryl in vitro. Phagocytosis was then evaluated based on the percentage of cells ingesting heat killed yeast. The percentage of phagocytic cells decreased at doses of 10 and 100 ug/ml. These concentrations are likely higher than can be attained during an in vivo exposure. Effects on this immune response are thus unlikely in field exposed English sole